«   Merry Christmas… better enjoy it now.
Everything I need to know I learned from television.   » 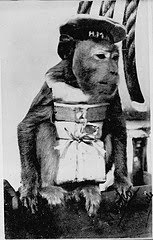 In the New Year, I am Perfect.

Okay, Christmas is great. My birthday? Totally fun. Mother’s day? Now you’re talking! But as for me, my absolutely favorite holiday is New Year’s, hands down. Not the staying up, or the parties…we hardly ever do that, anyway. In fact, while I was growing up our entire celebration consisted of falling asleep on the living room floor watching Dick Clark’s Rockin’ New Year’s Eve and having my Dad shake us awake at midnight so we could open the front door, say “Oooooo, there goes baby New Year!” and eat a piece of pickled herring for good luck. (I don’t know why. We were an odd little family.)
Nope. I love New Year’s because it contains my most favorite moment of the entire year. That moment when I wake up, walk to the window and look out at the world and the 365 unblemished days ahead and I HAVEN’T SCREWED ANYTHING UP, YET.
Heavenly.
Clearly, I’m the type that loves resolutions. I love that uber-organized, super-fit, ever-loving mother with zen-like calm and the impeccable spending habits that exists oh, so briefly in those first seconds of each year between the time the resolutions are made and, oh, I’m going to say, 9:05 AM January 1st, by which time the kids have started a fight, I’ve waded into the fray (probably grabbing a danish on the way in) and realized, nope. Just me. Frazzled, disorganized, sugar and caffeine-addicted me.
That never stops me, though. So, without further ado, my resolutions for 2011:

There’s more, I’m sure. Resolutions involving writing and fitness and the like. It takes many resolutions to really flesh out that impeccable person I dream of being. But for now, I only have fourteen hours to really cram in all my slovenly, self-indulgent, selfish, irresponsible tendencies. ‘Cause tomorrow is a New Year and then, WATCH OUT world! Prepare to be dazzled by my perfection….at least until lunchtime. Perfection is hard, y’all.

«   Merry Christmas… better enjoy it now.
Everything I need to know I learned from television.   »