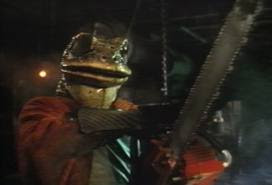 Hubby is trying to kill my holiday buzz.
Here’s the thing; he’s a history buff, which is normally quite useful to me. It’s a whole lotta’ information that I find mildly annoying and huuuuugely sleep-inducing, but that, thankfully, I no longer need to remember–I just ask him. “Sweetie, when did the Ottoman Empire collapse?” “Who was the 17th President, again?” “You know that guy?…The guy with the mole?…. What was his name?” Hubby has all the answers. Together, we are an awesome Trivial Pursuit team. (Him: The seventeenth century through the early nineteenth…Andrew Johnson…. Mikhail Gorbachev. Me: Kelly Osborn…. How to Marry a Millionaire……Louis B Mayer, MGM.)
Lately, his laudable team gaming skills aside, he is starting to freak. me. out. His natural inclination to track potential newsworthy trends has been focused, laser sharp, on the End of Cheap Oil. (the cackle of crows…. ominous music…) Every day he finds new evidence that we have tapped out our world-wide oil supplies. Oil Futures remain flat. China has stopped subsidizing gasoline for it’s citizens and there was no subsequent drop in price per barrel. Oil industry spokespersons confirm that oil fields are operating at, perhaps, 90-80% of their peak rates, the only truly productive fields remaining offshore and in Saudi Arabia, Iraq and Iran. (Hmmm, curious.) He will NOT stop telling me these things, despite my ever more desperate pleas. To him, this is fascinating. To me it’s end times.
So maybe I watched too many Science Fiction movies back in the day, but I know what the future looks like once oil is gone and the masses no longer have access to Mocha Venti Lattes and cheap electronics. It’s going to get allllll Mad Max up in here. You mark my words. We are not going to transition well. Hubby thinks it’s all very interesting from an academic point of view, but that’s because he maybe mistakenly thinks we’re higher up this food chain than we are. I got news; honey, we’re grunts. We are going to end up living with the mutant hookers in that slum town from Total Recall, which is NOT the life I envisioned for our children.

You watch. I’m going to end up living next to this guy.
As a result of all this, hubby is growing ever more interested in sustainability. He rides his bike to work, even in the winter. He talks about owning land. And sheep.
Me? I’m going a different route. When he gestures at the city and says, “All this is going to change.” I have the immediate urge to run out and start stockpiling coffee, chocolate and pretty shoes…none of which are indigenous to Minnesota. (We have soybeans, sugar beets and Red Wing Work Boots) I can’t imagine that when the oil is all gone, shipping cocoa nibs up to the frozen north is going to be a huge priority to anyone but me.
And you can forget about Christmas! Once Amazon.com stops shipping sweaters and DVDs Christmas is going to be Little House on the Prairie style lame. You’re gonna’ wish Santa gave you coal. Nice, combustible coal. As it is, we’ll be sitting around our makeshift wood stoves, burning bits of furniture we looted from the deserted Sharper Image store, drinking homemade sugar beet wine and reminiscing about Norelco electric razors and Chia Pets.
At least you will. I’ll be locked in my room, eating chocolate from my sock drawer stash.
Shares