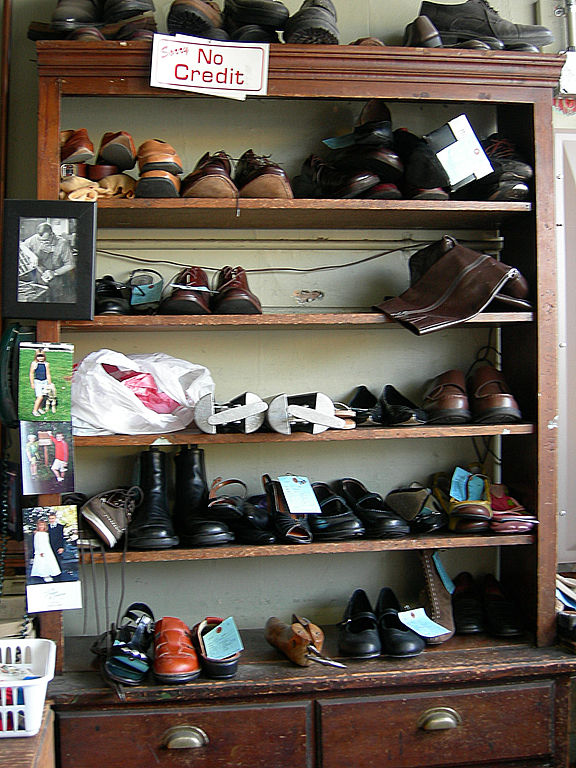 Yesterday I took my boots to be resoled. Found a lovely, old-timey shop run by an tiny elderly man in an apron, with wire rimmed glasses and handsomely calloused hands…he couldn’t have looked more like a cobbler elf if he tried. The shop certainly bore up to the comparison. There were stacks of shoes everywhere, and colonial-era looking machines for stitching leather, or, I don’t know, making horseshoes or something? Ahead of me was a young woman carrying four pairs of boots with run-down heels. After looking them over, the gentleman handed her a claim ticket and told her that she could pick up her boots in two weeks.

I should mention that there were huge signs in multiple places informing folks of this fact. There were shoes stacked knee-high against every wall. There were literally seven people behind me in line and this gal ever so sweetly looked at him and asked, “Actually, I leave for Europe on Friday. Could I pick them up on Thursday?”

Folks. It was Tuesday.

Imagine a movie. The set goes quiet, and I, the extra in the background, snaps her fingers and utters her one line, an slow and exaggerated, “Guuuuuurl, no she didn’t!” And then settles in and waits for this ridiculous request to get satisfactorily shot down.

At the risk of sounding geriatric, this is exactly what’s wrong with the world today. Or maybe forever. Loads of us wait patiently in lines, do not swear at the person on the other end of our customer service call, follow the arrows pointing the proper direction in parking lots, and why? Because to do so staves off just a little bit of the chaos in the world and ensures the slightest sliver of fairness –of JUSTICE!– in the random, dark Universe. These are small, and, yes, sometimes seemingly meaningless gestures that say, “I am important but so are you.”

Then there are those for whom the rules do not apply. Those who are traipsing off to Europe and thus need their shoes in two days. TWO. DAYS. That’s akin to waiting 45 minutes for a restaurant seating and watching as the hostess’s brother-in-law and his dippy friends commandeer the table that was meant for you. Do you know why it takes two weeks to get your boots resoled? Because people keep scooting ahead of you in line, that’s why. And, in any case, if you are taking FOUR pairs of boots to Europe, you are not packing correctly.

I watched her leave, this woman who is now my sworn enemy, and stepped to the front of the line. I surrendered my one pair of boots. Not just any boots, my favorite boots. The ones that go with everything I own and that I wear at least five times a week, November through April. Losing them cut my wardrobe exactly in half; political-induced weight gain has severely cut into the remainder. Look for my Christmas photos to feature me, in a caftan and flip-flops.

“Fine,” I said, which made me either a Defender of Justice, or the world’s biggest dope. I am not sure anymore. In a world of line-cutters, zipper merges, cheats and colluders, what is a girl to do?

But then I think, what if I don’t? What if nobody does? What if every place, every day starts to look like Walmart on a Black Friday morning? Perish the thought. There are those of us who must hold the line of order and civility. You will know us by our tendency to wave strangers ahead in the concession line, to refrain from using the speaker phone feature on public transportation, and to never, not ever, abuse the “10 items or fewer” express checkout. Curiously, at least one of us will be wearing fuzzy house slippers— at least for the next two weeks.