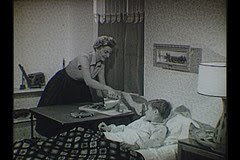 Everything I need to know I learned from television.

ooooooo…. my Perfect New Year has hit a snag. Seems that a certain television station has stopped airing reruns of Roseanne.
This is not acceptable.
I’ve only (relatively) recently begun watching these and have been struck with a whole new appreciation for the genius of that show. I remember watching them as a kid, of course, but watching them as the MOM…? Totally different.
For one thing, I didn’t realize it before, but I think on some level I’ve modeled much of my parenting on Roseanne’s wisecracking character. Example;
This summer, we were headed out camping when we heard a news report warning of bad weather.
“Mom,” said my eldest, with a quiver of trepidation in her voice, “if a tornado comes when we’re camping, where do we go?”
“Up.” I replied.
HAHAHAHA! See, she didn’t appreciate it then, but you just wait, in 5 or 10 years, she’s going to find it HILARIOUS! (Possibly.)
And I can’t even begin to tell you how my loyalties have changed. When you’re a kid, gee howdy, that Darlene was sooooooo funny. But these days my sympathies lie entirely with the poor, beleaguered parents. Like in the episode where Dan has started his own small business which I can tell you from experience, is extremely nerve-racking. His teenage daughter, Becky, is present in the shop when her parents get their first, big check. You know, the one that’s going to allow the entire family to remain living in their heavily mortgaged home and eat actual people food for the next month– and she takes this as an opportunity to ask, nay, demand a car. (note to firstborn; NO.)
That is just the kind of things kids do. I wanted to reach into the tv and slap the side of her head myself. Kids operate from a “What have you done for me lately?” view of the world. You could give them one of your kidneys but if you suggested that maybe, possibly, you might want to lie on the couch and recuperate from the surgery instead of driving them to Walgreens for green eyeliner and a pack of mechanical pencils, you will be the horrible ogre who HATES them and wants to ruin their lives forever! You NEVER do anything for them, NEVER! They truly have no idea that everything you do as a parent is somehow for their benefit, nor do they care when you tell them. Roseanne understood that and mined it for comic gold.

Whatever you need, dear.
Still, that isn’t the reason I’m going to miss that show so much. At it’s heart and in it’s best years there was a gentleness that ran throughout every episode. Roseanne‘s best moments weren’t in the wisecracks or the wacky story lines. The magical thing to me is the way the characters handled disappointment. I don’t know if you noticed it, but things very rarely went the Conners’ way. More than once Dan and Roseanne found themselves without a paycheck, kids got seriously sick, contests were lost, dreams went under…and at first, people didn’t respond well. They yelled. They cursed. They took their frustration out on entirely the wrong people but then, in scenes that seemed very true, they voiced their deep, deep fears and somehow came together. Maybe they just stood a little bit closer or rubbed a spouse’s shoulder or, yes, cracked wise, but from then on we all knew that sure, they were up Shit Creek, but by God, they were up it together.

See? Together.
Maybe I’m projecting. A matter of the perfect show at the perfect time. It happens to fit so flawlessly into my life right now. As a couple, there have been times this past year when hubby and I both felt bruised by one circumstance or another. But the way I figure it, if we can stand firm in the midst and point at the situations around us saying, “This and this and especially THIS I do not like…but I am absolutely crazy about you” then I will be a happy camper. And for the record and to the hubby, I am crazy about you, babe. Well, at the very least, I’m crazy.
I blame the children.
Shares