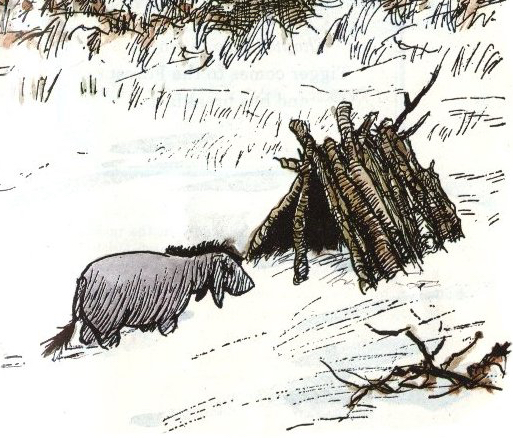 So, 2017 is shaping up to be the year Lanie learns to deal with disappointment. First, the human equivalent of a malevolent toe fungus took up the highest office in our country. Then, and maybe more devastatingly, our home appraisal came in so unexpectedly low that our planned kitchen remodel is a no go. I was running errands when I got the news and all I can say is that its a good thing the sight of a middle-aged woman crying in the aisles of a SuperTarget is par for the course these days or else I might have embarrassed myself.

What a baby. I should be delirious with joy that my greatest sorrow in life is that kitchen. That shitty, ugly, slanty, unworkable kitchen. Hardly worth mentioning, really. I don’t have leprosy, for goodness sakes. (And lucky thing, too. Leprosy is on the rise in the USA. True fact.) Losing my job and going into foreclosure would be much worse…although it would solve my kitchen problem. Certainly, it is no reason to spend whole days moping on the couch and issuing deep, heartfelt sighs every time dinner prep rolls around.

Friends try to help me by offering suggestions, mostly around the “You could do it yourself!” line of thinking. Snap out of it, people! The future is largely inscrutable and because of this, I rarely dabble in prognostication. However, I feel completely confident making the prediction that should Hubby and I embark on this level of DIY home improvement, there will be an electrical fire in our future. Possibly locusts. Definitely a divorce.

We were all set to do the demolition ourselves, because destroying stuff is completely compatible with our skill set. But now that the renovation is scrapped, the only kitchen improvement I will be doing is stuffing rags in the holes in the wall where the baseboards used to be. I got ahead of myself, you see, and now there is a solid three-quarters of an inch gap all the way around the room. It wouldn’t be so bad, except our resident rodent population now sees the kitchen as largely a skyway system connecting their little mouse fiefdoms. The other night I was standing at the stove making dinner (sigh) and one of the little buggers ran out from under the counter, straight across my feet, and under the refrigerator. I’m so pitiful, it barely elicited a response.

“Seems about right,” I muttered, gloomily–Eeyore as fry cook.

To make myself feel better, I’ve embarked on a general all home spruce up. Much needed, too. There has been a lot I’ve let go believing that we’d of course be changing all this. (She said, gesturing broadly) So why bother?

I’ll tell you why; because life is unpredictable and our best laid plans are about as substantial as smoke. And a cheery, freshly painted, if imperfect, kitchen is roughly a million times better than a run-down, crappy one you are honestly, truly going to update any minute now. So what’s the worst that happens? You put in a little extra work and enjoy your home the entire time? The horror.

So far I’ve rearranged our living room, replaced the worn-out loveseat, found a new lamp, replaced cushions, throw pillows and afgans. I’ve retooled my ceiling fan, painted the dining room and hung new curtains. I’ve ordered new dining room chairs and a beautiful watercolor print. I haven’t done anything to the kitchen, other than issue a stern eviction notice the the mice. But I have plans, dammit.

Sometimes its good to be reminded that our disappointments aren’t such big, fat, hairy deals after all. I read a book recently wherein the author advised that if you want to be happy, simply have less problems. So I’ve been practicing. My kitchen is NOT a problem. I don’t have problems. Do you know what I DO have? A new lamp and throw pillows. A new afgan and a freshly painted dining room. New curtains and chairs. And eventually, by all that is holy, I will have a new kitchen. Until then, no problem.