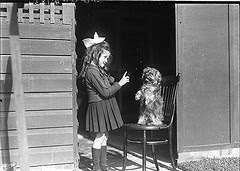 I just returned home from work to find the door open, the lights on in every room, and the kitchen counters festooned with blobs of jelly, bread crumbs and garlic clove skins from last night’s supper. All this despite the fact that I held my dear son by the shoulders this very morning, looked him soulfully in the eyes and told him to be sure and take care of every single one of those things. The kitchen counters, in fact, were left over from his job LAST night, which is why it was still messy this morning. Apparently the seven thousand times I’ve told him that cleaning up the kitchen includes, you know, the actual surfaces upon which the food rests, have yet to make much of an impression upon him.

“Nag, nag, nag.” he said, to which I replied, “I don’t want to nag you, you MAKE me nag you!”
Yeah, that’s the song James Monaco would have written, had he been a mother. “You Made Me Nag You…” Not that my kids believe it. The part of their brain that can recognize the connection between work not done and that annoying sound issuing forth from my mouth, is simply nonexistent. They honestly and truly believe that I for no reason at all, choose to remind them again and again to do the same chore, ignoring the self-evident fact that if it was done, I couldn’t say it.
“I KNOW!” they howl in response to my frustrated attempts to explain, yet again, how to sweep up the debris which invariably falls around the kitchen trash can. (For the record, I do not understand how five reasonably intelligent children -all with the gift of sight- manage to miss the trash can every blessed evening. It’s as if they stand in the dining room and just fling their used napkins and potato skins at it’s closed lid.)
“I KNOW!” they yell when I remind them that the table isn’t cleared until the table cloth is shaken out. And, yes, that means every single meal.
“I KNOW!” they bellow when I strongly assert that unworn clothing, still folded for the love of all that is holy, should NOT be sent down the laundry chute with their dirty underpants, because that is no way to clean your room, mister!

Just clean it up, already!
But they must not know. Because if they DID know I would have to admit that I am currently sharing my home with five little sociopaths who are merely messing with me for their own, twisted amusement. How else do you explain the dirty kitty litter boxes or the Wii remotes which are currently strewn, willy nilly, around the living room?
Right. They don’t know.
And I do not nag.
Shares