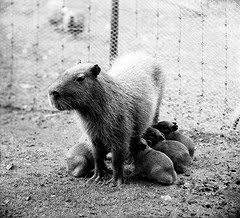 A Happy Mother’s Day to ME!

Haven’t been doing much writing the past few weeks. First, because I kept seeing periodic snowflakes and very concept of snow in MAY rendered me limp with despair, completely incapable of seeing joy or humor in anything. Then the weather got gorgeous and my mentality shifted to that of a eight-year-old boy on the first day of summer vacation. I was all “woo HOOOO! FREEDOM!” and had to be outside, dang nabbit! (I’ve got the sunburn to prove it, too.)

Next, my mom came to visit and stayed an unheard of four and a half days. Four and a half!!! Normally the frenetic activity and ear-splitting din of seven people and two felines will drive her away long before that.

We must be growing on her.

Because of this, I got to spend Mother’s Day with my very own mother this year, which made the whole day extra special. There were donuts and flowers, cards and presents, a lot of card playing and talking. Miss Teen Wonder wrote me a card in Chinese calligraphy, including poems in both English and Chinese which she read out loud to us…. it would have been even more touching had she not then slid a homework assessment across the table which asked me to grade her card. So who cares if her gesture wasn’t entirely without self-interest? I still gave her an A+.

Elder Son gave me a homemade card stuffed with cash money. You may remember that his life motto is, “Give me a dollar!” so you know this was no little sacrifice on his part. This prompted Little Man to run to his own piggy bank and drop 37 cents into his card. A better woman would have given them their money back. I took my mom to the movies.

Earlier in the day, someone asked Miss Teen Wonder and Elder Son what they admired about their mom. Elder Son said, “Her sense of humor.” No surprise there, I’ve always been funny …looking. (What? He would totally think that was funny. What can I say? He’s simple that way.) Miss Teen Wonder shocked the heck out of me when she said, “Her determination.”

My what, now?!!! “Her ability to eat entire platters worth of pancakes.” Maybe. “Her vast knowledge of 80’s pop song lyrics.” Definitely. But determination???? Who knew?

It made me think of a conversation I had with my mom this weekend. She was lamenting mistakes that she thought she had made and which I had utterly no recollection of. Here she was feeling guilty for something completely unnecessary when what she should have been feeling guilty about was telling a child who was too young to comprehend sarcasm and with a highly developed case of hypochondria that the rash on the child’s arm was “…probably leprosy.”

You know what? No. She shouldn’t even feel guilty about that. I LOVE that story. I love that she said it. I love that I was such a complete dope that I not only believed her, but started to formulate a plan to hitchhike to Hawaii (What? I was SEVEN.) once my fingers and toes started to fall off. It is one of my most beloved memories from childhood. Like baling hay with Grandpa. Or eating mom’s brandy slush out of the freezer like it was ice cream. Delicious, liquor-flavored ice cream.

I’ve already had similar cognitive dissonance with my own kids. A few weeks ago, I apologized to them for a truly vile mood the day before. “I’m sorry I was so angry,” I said, because I believe in apologizing when I’m wrong. The kids looked confused. “You weren’t even mad, mommy.” the twins said. Which made me feel better for exactly five minutes until it occurred to me that they could have actually meant, “…Well, no more so than USUAL.”

Gotta’ get my movie money somehow.