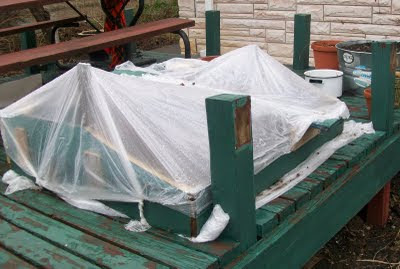 Nothing says “I Love You” like a finished patio.

Spring is here, hooray! Or, at the very least, vaguely less winter-ish weather. Although it could be warmer, I’m no longer in danger of freezing to death while waiting for the bus, so that’s good. One teensy, tiny complaint, however; once all the snow receded it revealed that apparently we did a horrible job picking stuff up before winter hit. Our place is littered with kids bikes, gardening supplies, a big, ol’ bucket, the rain barrel…We are one rusty beer can away from having a total redneck backyard. I’m sure that my neighbors are thrilled.

Then Hubby went and did this:

Let me explain to you what you are looking at. Hubby, his enthusiasm for gardening at a fever pitch, but stymied by the unrelenting cool temperatures, decided that he needed some cold frames to start his plants. As he was at that moment resting his seedlings on top of my PIANO I thought this was a great idea. Being the newly converted King of Thrift, he did not wish to spend money on this endeavor, so he decided to use what we have on hand…. otherwise known as “sawing down half the deck railings to use as lumber.”

Now the only reason that he thinks he can get away with this is because I hate that ugly deck. I loathe it and have since the day we moved in, thirteen years ago. So, to his mind, this made it permissible…desirable, even. He was using something I didn’t even like to make something useful, so how could I possibly be put out…?

Let me tell you how. Here’s how I see it; for thirteen years I said, “Baby. That deck is an eyesore. Rabbits live under it. Mosquitos cluster around it. It is ugly as sin and poorly constructed to boot. Let’s get rid of it.” And, for thirteen consecutive years, he ignored me. This year he decided there was something useful in it and took what he needed, further uglifying (not a word, but it should be) up my home, brushed his hands together and said, “Done!”

This reminds me of a story. This story is called, “Once Upon a Time, My Husband and His Father Decided To Put In a New Shower Head and Tore Down the Inner Wall of My Closet To Get At The Pipes and Never, Not EVER, Put The Wall Back Up. The End.” The same thirteen years I have been forced to endure our dreadful deck I have been living with a tablecloth pinned to the back of my closet because someone hates me, apparently.

They wouldn’t have even finished the shower, truth be told. You see, when my Mother-In-Law and I returned from a afternoon out with Miss Teen Wonder (at that time, Miss Cutest Toddler You Ever Saw) we found the two of them, leaning against the kitchen counter, eating potato chips.

“Are you done?” We inquired.

“Nope.” They shrugged. “The pipe is stuck. Nothing we can do.”

I took one look at the previously perfectly functional shower torn to bits, the drywall littering my bedroom and quietly walked upstairs to hyperventilate.

“You.” said my Mother-In-Law pointing at her husband. “Come here.”

A few hours and one shiny, new blow torch later, the shower head was installed, though we all know what happened with the closet wall.

This shall not be repeated with the deck.

Hubby is attempting to appease my wrath by speaking of attractive screen houses with paved floors where the deck now stands. And a new patio table. I’d be much less skeptical if he hadn’t absconded with my summertime, backyard beverage tub and used it to mix cement. The boy has no appreciation of aesthetics, is what I’m saying. He thinks the backyard looks perfectly fine. The deconstructed deck bothers him not one whit. Of course, he also wants to raise chickens in the kids’ fort. The crazy hillbilly.