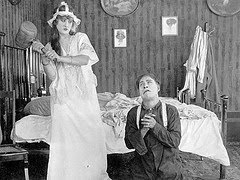 In fact, I barely got THIS written.

Yesterday a good friend of ours came over to the shop for a little coffee, nosh and advice. (Yes, we are a full service cookie shop.) Turns out that she wanted to set up these monthly seminars and needed our help brainstorming. Now, she didn’t need help with topics. She didn’t need ideas on people to lead the sessions. She didn’t need any suggestions on location. What she wanted was the answer to a single question; How do I make myself DO it?

Honey, are you asking the wrong person.

I should tell you that I, like ninety-four percent of Americans and, I’m guessing, a greater number of bloggers, am writing a book. I have been writing this book for roughly my last twenty-seven lifetimes. I have been writing this book so long, that not one, but two word processing programs have gone obsolete in the interim, forcing me to retype chapters into shiny new computers. I clearly have nothing to offer on this particular subject.

I used to have a great excuse. “I have babies,” I’d whine, “all these little babies.” But, the babies are all older now so the only thing standing between me and my goal is sloth, pure and simple.

“Lanie,” you say, “it is so very easy to carve out time. Just wake up an hour earlier in the morning, and there you go!”

No, there you go. I have tried the hour early thing again and again, but each time my alarm goes off I only manage to shake myself awake long enough to mutter “Hells to the no…” before I slap the offending clock and go back to sleep. (It also tends to put a crimp in my marathon training. In fact, I’ve found the best tactic is to just sleep in my running clothes. If I’m lucky, I’m standing outside my front door, shoes in hand, before I really comprehend that I’m awake. This technique does not seem to translate well to writing.)

Seriously. Don’t even try to wake me up early.

“Well, perhaps you are more of a night owl. Perhaps your best writing happens at night!”

Ummmm, again, no. See, at night I am good for only three things: folding laundry, drinking copious amounts of wine, and watching truly horrible movies on television. Last night was the BEST worst movie I ever saw. It was a late ’70s combination ninja/mobster flick where the ninja wore a sparkly, silver helmet (which didn’t strike me as the most discreet ninja costume in the world, but what do I know?) and exacted his revenge on the man who killed his wife by impaling his foe’s hands to a board with a samurai sword (which he, of course, forged himself in his grief) and running him through a wood mill saw. Now exactly how am I supposed to escape the gravitational pull of that cinematic masterpiece?

My husband often says that our children inherited their impressive intelligence from me. (I’d protest, but I just hate to make a fuss.) However, these kids have something I don’t; the ability to make their goals a reality.

Last quarter, Eldest Son’s report card was A, A, A, A, B-, B-, B. Because I believe he was capable of more, I asked what was with the discrepancy in his grades.

Well, what do you know? He does take after me.

So, I gave him the dutiful, “Being excellent isn’t limited to just the things you like.” lecture that I am morally obligated to say as his mother. I have to say it, even though I’m not so sure it will have any positive effect…much like the talk Miss Teen Wonder got after I was left alone in the orthodontist office with a stack of People magazines. It was called, “Don’t think that nothing bad can happen to you if you drink at a friend’s house when their parents are home. Remember your friends are stupid and drunk and they would rather let you choke on your own vomit or drown in the bathtub than wake up their folks to ask for help and risk having their cell phones taken away, if these articles are to be believed.” I’m rather proud of my lectures, actually. Perhaps I should compile them into a book. (Chapter One: “So you like to play with matches?: a visual exploration of skin grafts.”) My point? This quarter Eldest Son had straight A’s.

I’m thinking of hiring him as my ghost writer.