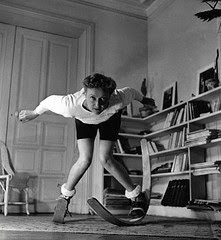 Wow. Time flies when you are having an politically-induced aneurysm. I haven’t posted for a while, just because I have been far too busy shaking my fist at on-line news sites whilst yelling expletives. This requires far more time than you could possibly imagine.

But not today. Today I am taking a break. The Powers That Be are just going to have to continue on their nefarious paths without my commentary, because today I am doing…SPAZZCAMP!
Spazzcamp is the name I have given to my own version of aerobic boot camp. You see, my best friend was telling me about the official boot camp that she does at her gym. Led by, you know, an actual knowledgeable and licensed trainer. “Sounds like fun,” I thought, “But I don’t need them there fancy trainers! I shall do my own. In my basement.” Because that would totally be just as good, don’t you think?
An official boot camp looks something like this:
In sixty-second intervals;
Jumping Jacks
push ups
mountain climbers
sit ups
dumbbell dead-lift rows
jump rope
single leg plank raise
lateral step up with hop
repeat
repeat
repeat
repeat
Spazzcamp looks like this;
for indeterminate periods of time, because who can watch a clock and do this anyways:
jumping jacks
crunches
more jumping jacks
girlie push ups
uh…jumping jacks
that thing, you know, on the inflatable ball
um…jumping jacks!
that superman thingee
pretend jump rope, ’cause you know, we’re in the basement — On carpet.
high knee jog in place
jumping jacks!
evil squat thrusts…maybe five in all. Lie on floor until we think interval is probably done.
jumping jacks
do not repeat. Sit on couch until urge to vomit passes.

Yeah. Totally just as good. Actually? Better. And here’s why; flailing about like a complete dork in my basement for thirty minutes (okay, fine! …twenty) makes it extremely difficult to take myself and the world quite so seriously. You can only trip on your own feet so many times before the giggles set in. And once they do, life seems a little more rosy, politics a little less ominous. Which is a good thing since I just checked facebook for Michigan updates….
Looks like I’m going to be doing a whole LOT of Spazzcamp this spring.
Shares