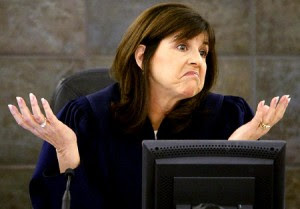 When little things mean a lot.

It’s the little things that’ll get you.

This morning hubby woke me up early. Like super, duper, I’d-Rather-Be-Dead-Than-Awake-Right-Now early. He had missed the bus and I would I mind if he took the car? (Answer; No. Shut up and go away.)
Now, I don’t mind that I had to take the bus, myself. I don’t even mind that he woke me up in the first place. What I resent like crazy is the following half an hour of random pacing through the house on his stupid, giant, work-boot clad feet.
Dude. Don’t make me come out there.
I like to think that when the chips are down, I am capable of wise and selfless actions. But these little, petty annoyances??? I’m way less good at letting those go. I’d feel worse about it, but I suspect that it’s true for just about everybody. The same person who loses everything in a house fire and expresses only gratitude for their family’s safety will find themselves incensed to the point of a brain aneurysm over a slow driver puttering along in the left-hand lane of the highway. Another deals with the passing of a loved one with grace and strength but ends up in a screaming match with a relative over a chipped kitchen bowl.
We all know that it’s true, but we don’t really acknowledge it. If we did, our court system would be totally different;
Judge: You, the defendant, are accused of bludgeoning your husband to death as he slept with your AM/FM radio. How do you plead?
Woman: Not guilty, your honor. I HAD to to it…. he was a mouth breather.
Judge: Case dismissed.

I don’t see a problem, here.
You know who truly understands what I am talking about? Who comprehends the awesome power of the petty annoyance?
Little man.
That’s right. Our youngest son has turned Driving Mom Insane With The Smallest And Least Significant Action into an art form. All yesterday evening he MOSTLY did what I asked. With a passive hostility. And slowly. You folks with kids know what I mean. I said to the little one, “Set the table.” He put a stack of plates on the table and walked away. I said, “Don’t forget the napkins.” He tossed two on plates, one on a chair and the rest on the lazy susan. I said, “We’ll need spoons.” He got three teaspoons, two soup spoons, a measuring spoon and a serving spoon.
This went on all night. Chore time was a nightmare. Homework was excruciating and all because he just chipped away at mom’s sanity by doing tiny things to annoy me. And do NOT suggest that it was accidental. The final straw came as he got ready for bed. “Brush your teeth” I said and when I went to check on him he was sullenly staring in the mirror, brushing his tongue.
With deadly calm I repeated, “Your teeth. Brush. Your. Teeth.”
He looked at me, very deliberately stuck out his tongue, placed the toothbrush upon it and slowly brushed…brushed…brushed…
That judge is going to give me a medal.
Shares