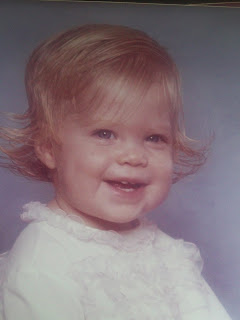 Well, the deed is done. Hubby and I are officially registered for the Twin Cities marathon this October. To “celebrate” I knocked off ten miles on the treadmill yesterday. Right around mile eight, I started to seriously question the whole endeavor.
Why am I doing this, again?!!

I’d say it was some sort of mid-life crisis, but it’s FAR too early for that. What? I’m totally going to live to be over 100. We German farm girls are tough old broads. I’ll be dragging my wheeled shopping cart around this town into the next century, you mark my words.

So, clearly, it must be something else.
The marathon itself is…god, what? Difficult. Fearsome. Exhilarating. When we ran it in 2007 I kept looking at hubby and asking, “We’re doing, WHAT, again?” My brain just sort of refused to accept what was happening. Partially because it was so far removed from the person that I was.
Look at this kid;

The fact that she grew up to be a baker would surprise no one. Clearly, I had already developed a strong affection for cookies. But that she could run a marathon??? Total game changer.
Running those 26.2 miles lets me change the adjectives I use to describe myself. Although, I’m still not certain which descriptors I get to use. In a brief and heady flush of over-confidence, I kicked around “athletic” but decided against it for several reasons;

So “athletic” is out. I’m considering alternatives, like “determined” or “persistent” or “goal-oriented.” But just between you and me, I’m afraid that we already know the winner…