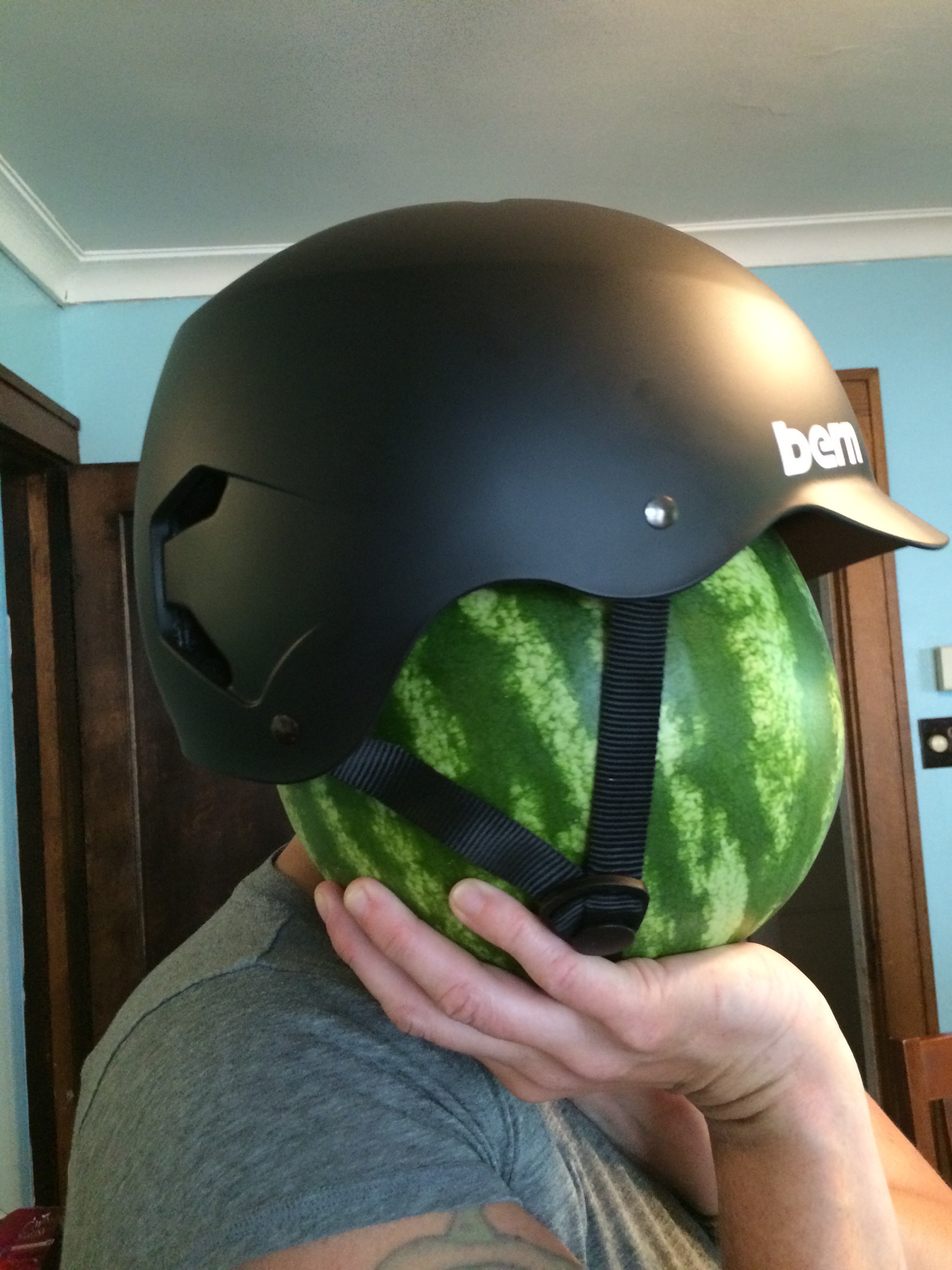 Heavy Lies the Head That Wears the Helmet.

I did it. Two months of bike commuting has exposed me to so much vehicular buffoonery that I broke down and purchased a bike helmet. Actually, I bought two. Though there are those who scoff when I insist that my head is abnormally large, no, scratch that, giant, it really is as big as all that. And now I have the proof.

When I bought my first helmet in a adult size large, I got it home only to find that it wasn’t so much a bicycle helmet as, perhaps, a bicycle helmet shaped fascinator–those comically teeny hats that women wear, jauntily askew to, say, the Royal Ascot Horse Races. All that was missing was a veil to drape seductively over one eye.

It was not attractive and probably not doing much to protect my noggin, so I went on the internet and did some actual research. I measured my head and found that my helmet size is a full, straight up XXL/XXXL. Huh. With a head that large, you would think that I would be more smarter.

Vanity had me hoping for something cute. Say a polka dot helmet or at least a vaguely pretty color, but no. The only big fat head options were black or white. I was afraid that white would make me look like an invading alien in a 1960s science fiction movie, so I went with black. It was probably the best choice. Everyone knows black is slimming. On the bright side, it’s probably the one thing in the joint that my kids and husband won’t try to swipe since their normal, people-sized heads would rattle around inside it like gongs in a bell.

Now that I have the whole helmet thing under control, I can focus on other aspects of my transition to bike communting. For one, why is everyone in such a dang nab hurry? I mean, I don’t feel as if I am abnormally slow, but then again, I thought my head was smaller than a Halloween pumpkin. I kid you not, the other day a dude on a skateboard passed me. But to be fair, he had four wheels and I only have the two.

I might be able to muster the speed to keep up with the crowd, but why? I don’t understand why every jaunt on a bike must be undertaken with a frantic cycling of limbs, as if comically sprinting away from a cartoon bear. It makes me nervous. I’m afraid to look behind me and see what’s chasing everyone.

And I’ve said it before, but stop shrieking that you are ON MY LEFT!!!! I know you are on my left. Do you know how I know? Because I am, apparently, the only person left alive who does not bike while wearing headphones and I heard you coming.  As fast as you are pedaling, you have not, as of yet, broken the sound barrier. It may take me a minute to meander to the far side of the path, but only because of the forward momentum created by my huge cranium, and now, helmet. Trust me, I’ll get there eventually. The absolutely LAST thing I want to do is be in your lane when you whip past me in your favorite, well-worn bike shorts, putting me directly behind what looks like two cantaloupes in a mesh laundry bag.

Answer: About 10 washes before anyone thinks they do, apparently. Which on the upside, makes me feel much less self conscious about my helmet.