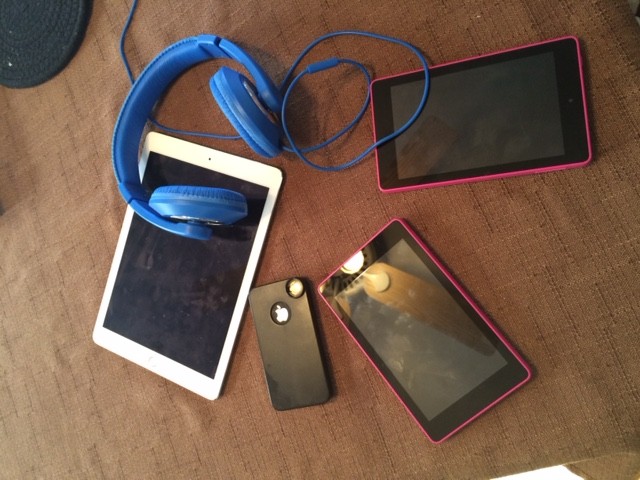 One thing about working in an Eco-friendly store is that many of our customers have terrifying hobbies. Hobbies like tracking world extinction rates or researching birth defects attributable to chemical exposure; hobbies they are deeply committed to disseminating. In short, they are sharers.

Normally I love sharing. Do you want to share a cookie? A beer? Ride to the movies? Awesome. I’m your gal. But when what you want to share with me are night sweats caused by straight up panic and feelings of futility? That doesn’t seem fair.

Most recently a customer shared thoroughly fascinating research about the ill-effects of smart phones and social media on the brain, specifically as it affects children.

It’s a seductive argument. I’ve raised five of my own labs rats and I’m intimately familiar with the glazed eyes and short tempers that follow in the wake of a protracted YouTube binge. I’d certainly like to believe that their anti-social antics are brought on by constant access to immediate gratification and NOT to genetics. Get’s me off the hook, anyways.

It’s a problem we’ve been grappling with a lot more recently. Although that is probably due to it being February in Minnesota, right? We’re all stir crazy; cranky and fat and pale from lack of sunlight. Everyone is shut up in their own rooms, cocooned under every available blanket and just beep beep booping away on their little screens.

I’d like to say it’s just the kids, but that would be a lie. I have, I’m embarrassed to say, taken an obsessive interest in yet another of the Real Housewives franchises and spend far more time than I care to admit watching blond, bejeweled harpies screeching at each other over cocktails. I are more dumb getting every minute winter continues. Thank goodness for last week’s unseasonably warm weather. I was was able to chase everyone outside, and not a minute too soon. I swear it was beginning to feel like I am raising veal calves, not children.

It’s tempting to think that technology is making it worse. In my mind, I think of this time of year as cozy, not claustrophobic. I seem to remember idyllic childhoods filled with sledding and ice skating and board games, though I suspect my mother’s memories are less rosy. Probably my brother, sister and myself spent the majority of the winter torturing each other as only siblings with too much time on their hands can. But at least that was creative. This passive and unending consumption of online entertainment strikes me as unwholesome. I’m so tempted to pull the cord and yet…

…Last weekend when my book was published, I threw up a Facebook post by way of announcement. Within minutes I had my first well wishes. I heard from all my friends, from my family. I got a lovely email from a high school friend and one from another schoolmate’s mother. A woman from my hometown emailed me and co-workers from previous jobs. I want to tell you that each generous massage was deeply appreciated. I was nervous and jittery and all that online support soothed me greatly.

We can too easily forget how wonderful people are and flippantly categorize our fellow citizens as just complicated coffee ordering, politically dangerous annoyances who are too busy texting and driving to pay attention to the people around them. Oops. Maybe that’s me, again. It’s such a wrong and lazy attitude and I’m having a hard time wholeheartedly condemning the electronic medium that reminds me so often that, what do you know? I do like people.

Maybe that’s the trick; it isn’t the time that we spend on the machines, it’s the way we use them. We spend too much time online numbing ourselves to the world around us, when we just as easily could be using it to connect us. Who knows? Maybe the young ones have figured that out, already. I’d like to think that they are building bridges and inspiring creativity in ways my old times brain hasn’t caught up with, yet. That’s the kind of possibility that warms your heart. Or a cold February in Minnesota.