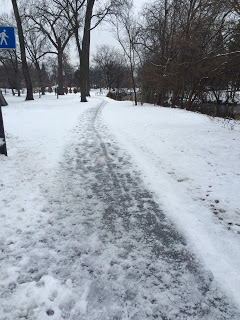 I recently read a book on marketing…okay, the first half of the first chapter because, hello, marketing? Snore. But it did bring up the concept of systems. Everybody needs a system–a set method and timetable for getting shit done. Sounds great, maybe. I mean, I love any excuse to make a list–YES! Lets organize this place! Let’s organize my LIFE! Scrub the bathrooms on Wednesday, clean the floors on Thursday, lay out running clothes every night then go make lunches for the next day. That kind of stuff sounds wonderful.

But systems=consistency and I am not particularly awesome at that. Rope me into a daily schedule and in two days, three tops, I am whining like a fifth grader the first week of December, desperately counting the days until winter break. I have no idea how other grown-ups handle the tension between reliable schedules and freedom, but I have to believe it’s a whole lot better than I do. Kirk, for example. Kirk never, not ever, has complained about going to his jobs. Not in twenty-some odd years. More than likely that is because he is a mature adult and not because he’s trying to make me look bad. (But I wouldn’t put it past him. I mean, honestly, not one dang time…? That’s just crazy.)

This is lack of consistency is one of many character flaws I am forever trying to fix. Which is why I decided to follow up my ultra-marathon with a one hundred day running streak. One hundred days of easy running; no worries about time, pace or distance. It should be, I thought, a piece of cake.

It is horrible. It is ten, no, a thousand times worse than training for long distances. It’s like running jail;

I resist and resist, dragging myself out the door, drawn by the singular desire to add one more check to the growing number on the calendar. (Actually, stars. Never underestimate the power of a gold star.) Then, suddenly, out of the clear blue, there’s a morning when I feel I could run forever. No pattern to suss out, no possible reason why; on this day I want to run and on so many others, no. I do not.

But stop running and see what happens. In a month, maybe two, you are back to square one. Oh, that hurts. It is completely unfair that so many of the gains in our lives disappear unless we pursue them relentlessly. That’s why I don’t lift weights. There is nothing in that activity that I enjoy, other than not having huge, old lady bat wings, and to think that I would have to hoist those weights unceasingly to the end of my days to keep the results…? Forget it. I never liked wearing tank tops, anyways.

But not everything is solved that easily. It’s hard to move ahead on your goals without disciplined forward motion. Too often my trajectory resembles a nap-deprived preschooler–“Ohh! A butterfly!…Squirrel!…Can I have a snack?”–just running willy nilly through the park. I have to believe I could accomplish a great deal more if I had a modicum of focus. Which is the reason for the daily run. It’s a small way to practice consistency and discipline. My hope is that I will learn to overcome the mental resistance I’m experiencing. That I will evolve to having zen-like acceptance of all things, a serene, beaming, ecstatic vision of happiness no matter what. Which I admit places an awful lot of pressure on a simple morning jog. But maybe not too much on one hundred of them.