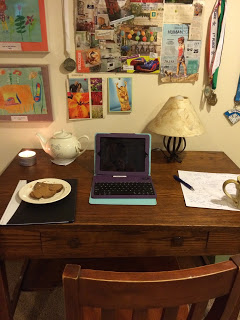 A Desk of One’s Own.

I don’t know why I thought writing a book and simultaneously training for an Ultra-marathon would be a good idea. Perhaps because my parents dropped me on my head at some point, I’m guessing. It definitely doesn’t speak to a clear grasp of my personal reality or an understanding about simple time management. Plus, as it shakes out, they are both coming to fruition about the same time which means I am stuck in the middle of a month of anxiety about the outcomes and nothing good has yet happened. Well, nothing but this:

That, my friends, is my very own desk. I haven’t had a dedicated space for writing, ever! And yes, I know, the magazine clippings on the wall make it look like a fourteen-year-old’s bedroom and, yes, that is a vision board (Don’t judge me–if Oprah says a vision board will get me a kitchen remodel, then vision board it is.) and I admit, it is a little too close to the cat box to be entirely magical, but, sweet mother of Jesus, a space of my own?!! I am in heaven. By my calculations, I have about five hot seconds before the kids start stealing the pens out of the drawer and leaving their dirty socks on the keyboard, but I am going to enjoy every single moment before that happens. I may even get some writing done.

Maybe. Right now it is mostly the place I escape to, in order to eat peanut butter toast in relative silence. Because peanut butter toast fuels the writing process, obviously. I’ve had three pieces already this morning. (Someone better adjust her toast-to-writing ratio, or my next blog will be brought to you by The Biggest Loser.)

Another plus, though it might not seem to be so on first blush, is that my desk is very close to the laundry room. Here’s why that is a good thing; Sometimes you need to pace. Or mull something over whilst engaging in some mindless, repetitive job. Or just burn off a little anxiety, because clearly you have used up every good, creative thought that could possibly be born out of your brain. Right now, for instance, I am 95% positive that I have used up all my ideas and that I am, at this moment, an empty shell of a woman. (Well, an empty shell filled with toast, like a piñata, but you get my point.)

I can mention it, I think, because I know other people feel exactly the same. We readily own all of our faults and errors, but the good things we do…? We feel like we hit the lottery. Rather than name our successes as the inevitable result of our hard work or expertise, we chalk it up to chance. You know, I have been writing since Junior High, and every single time someone comments that they like something I’ve written, I nearly fall to the ground, limp with relief. “Fooled them again!” I think, so grateful that it has magically escaped their notice that I am a total fraud who can barely string two words together.

And the craziest thing is how very common that belief is. This world is full of generous, brilliant, kind and creative people who not-so-secretly believe themselves to be dull, talentless, under-performing hacks. Who feel like they are clumsily plodding through their days, never aware of the graceful dance we see in their movements. Such a shame.

It reminds me of something I read and passed on to Miss Teen Wonder last year, when she was struggling with the transition to college; “Never compare your insides to other people’s outsides.” Rare is the person who manages to come out of that comparison unscathed. Of course, have enough kids and the Law of Averages mandates you will find yourself living with just such a person. And I do.

One of our twin girls used to worry me half to death. She seemed so needy for attention that I worried she would never have a sense of herself, that her tendency to fling her little body into the spotlight was the result of low self-esteem. Oh, but I was mistaken. I see now that she was merely waiting for the rest of us to get on board with her obvious fabulousness–a trait that, as her mother, I find admirable and only rarely irritating.

She is so comfortable with herself and aware of her many gifts that I think she is honestly taken aback when she enters a room and there is no applause. At least, she wouldn’t be surprised if there was. Furthermore, she cannot understand why everyone else does not feel the exact, same way. I often hear her lecturing her more anxious sister about recognizing your own talent and she is very generous in her assessments of others.

That child’s insides match her outsides, no doubt about it. You can bet she wouldn’t have waited 30-some odd years to set up a desk. What can I say? It takes some of us longer than others–and if we aren’t exactly dancing yet, at least we’ve turned up the music.