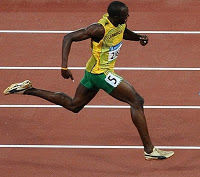 I’ll Get Her Next Year!

I got my Mother’s Day present early this year.

Once again, I blatantly strong-armed my family into running the MDRA  Mother’s Day 5k with me. (“Fine. I mean, you don’t have to do it…Even though it would make me happier than any other gift. I love you so much, I wouldn’t want to force you. Really kids, it’s up to you…”)

Anyhoo, we crushed that thing. I mean, really nailed it. I pulled out a sub-30 minute time, which I was not expecting. My runs have been horribly laborious and torturous lately. Slow to the point that I was beginning to suspect I had some sort of tumor pressing on my spine– a tumor of slowness and defeat. 29:52 for a very hilly 5k restores my faith in the possibility of pulling out a respectable season. So, HOORAY, and all that.

I was not the star of the family, though. Hubby, being a total smartass, offered a bounty of $3 to any kid who could beat me at the race.  One of our 11-year-old twins, hereafter known as “Speedy”, finished so far ahead of me I never even saw her cross the finish line. So what? 28 minutes? 27? Sure, she’s been lying on the couch ever since we’ve got home, but that’s a small price to pay, really. I mean, if I could pull off a 27 minute 5K I wouldn’t care if I ended up in traction.

Our eldest son surprised me, too. He finished some time after me, but only because he held back and ran with his little brother. In the home stretch, however, he took off at a sprint.

Let me set a picture for you; this kid is 14 years old, 6 feet tall and about six inches around. When he hugs me, his waist hits me at mid-chest. When he took off running, really running and not slogging through, like his poor, gravitationally challenged mother, all I could see were visions of Usain Bolt and his 9 foot strides.

“Why, for the love of all that is holy, are you not running track?” I implored as we walked to the water station.

He shrugged and muttered something about not liking when people get “weirdly competitive” then shot me the side-eye. I can’t imagine what he meant by that.

He’s probably just upset he didn’t get the $3.

Tomorrow is Mother’s Day proper, but for me the real celebration was today: the joy of sharing your passion with your kids and the elation of having them surpass your own, modest talent. Plus, in a related bit of good news, next year I won’t be the object of Hubby’s challenge. Whoever beats little Miss Speedy is going to win the three smackeroos.