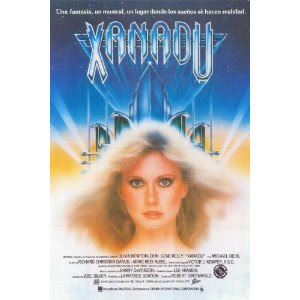 Dear Diary, This is Getting Old.

I know people who collect and read their old journals. Not me. I’m of the mind that it would be better if I just burned them. Not because they are incriminating or embarrassing (though, of course, they are.) No, I would like to burn them all, because I hate the fact that every time I stumble across one, I realize that I have been wrestling with the same issues forever. I’m quite certain that if managed to unearth my Holly Hobby diary from elementary school, the only difference between then and now would be the little hearts festooning each “i”. (Sample entry: “Dear Diary, I should never have spent my allowance on those Chic jeans. White pants make my butt look enormous!”)
It’s frustrating to someone whose personal motto is “Ever Forward!” to think that she’s been stuck in the same, dad-blamed spot ever since Xanadu hit the big screen.

Roll on, Olivia Newton John, roll on!
It happened again last night. I was heading to a meeting at my son’s middle school and needed some paper to take notes. Once I got there, I realized that the notebook I had grabbed was one I had been using as a journal, three years ago. As I read through the entries (while responsibly paying super close attention to the meeting, of course) I was struck by two thoughts;
1) I have amassed a huge collection of excellent motivational quotes, and
2) it is time, as my dear Grandmother would say, to piss or get off the pot.
For the past forty-two years, I have been examining my perceived flaws, turning over in my mind my stumbling blocks, collecting opinions and advice, reading, writing, pondering….
I think, perhaps, enough.
I don’t need any more questions. I don’t need any more inspirational books. I don’t need to collect any more philosophies or helpful suggestions or strategies for living. I know everything I need to know. I know who I am. I know what I believe. I know exactly what I want from life, both my plan A- win the lottery, immediately retire and spend the rest of my days lounging in the breakfast nook of my expanded and remodeled kitchen reading celebrity blind items…er, I mean, Flaubert- and my more realistic plans B, C, and D.
If the past four decades could be catagorized as “Preparation”, then I declare the focus of the next four to be “Execution.” (After that? “Napping.”) Time to stop agonizing over the best organizational system, say, and just throw out all the extra crap; time to stop fretting over which mental technique is most effective at quelling anxiety and just stop entertaining worrisome, critical thoughts. Too long dithering over the “best” way to accomplish a task starts to feel like mere procrastination. There’s more than one way to skin a cat, people, so it’s time to just get on with it. Those cats aren’t going to skin themselves.
Ew. That took a nasty turn, but you know what I meant. It is time for DOING so that the next journal I find is filled, not with hand-wringing and worry and tentative plans, but this:
“Dear Diary,
Busy being awesome.
Again.”
Shares