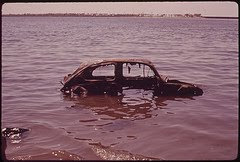 Yes. You CAN Buy Love.

Oh, the joy and happiness of watching my children, cheerfully engaged in productive work…no. I am NOT drunk. Hubby and I finally broke down, joined the new millennium and bought a Wii. We told the kids that they couldn’t play it until this place was cleaned up. And, honeys, momma isn’t lifting one dang finger to help. Every once in a while, I meander into a room, wave my coffee cup vaguely over the domicile and offer helpful suggestions, like, “Don’t forget to dust.” and “Did you clean under the bed?”

This Wii is the most fun I’ve had in ages and we haven’t even cracked the seal on a game, yet.
Of course, getting the darn thing turned out to be a pain in my tuchas. We surprised the kids last night at SuperTarget, grabbed the whole darn system, three extra games, chargers, extra remotes. Watching their notoriously cheap parents act with such abandon must have renewed their faith in miracles and the power of prayer. And trust me, they have been praying mightily for this gaming thing for a while. (sample prayer; “PLEEEEEEEEEEEZE can we have a Wii. Oh, PLEEEEEEEEZE?” Sure, it’s not the peace prayer or anything, but it turned out to be effective enough.)
It was all going swimmingly. Their little faces were all aglow, mom and dad for once were the heros of the hour, peace and love reigned…then our check was denied.
Sonova’….!
Mortified, we duly called the phone number on the check as instructed by the sales clerk and were informed that as we had not established a history of writing large checks (see aforementioned cheapness) they could not approve the sale.
“But we have the money.” I said, reasonably.
“Yes.”
“But I can’t have it?”
The woman on the line paused. “You may have $100.”
Wow. $100 of my very own money. Thanks. Suddenly our Credit Union had decided to act like I was a drunk and unstable pop star and assume conservatorship over my finances. And the thing is, the Wii is hardly the worst financial decision I ever made. Where was the bank when I spent the bulk of my college tuition money on spiral perms and Doc Martins, hmmmmm?? If ever I resembled a tipsy pop star it would’ve been college, not now. And how about the time we bought a used car and unbeknownst to us, the frame had completely rusted through to the point that the darn thing SPLIT APART as I was driving it. I wouldn’t have minded a bit if someone would have stopped that sale. But NOOOOOO.

Our car was in slightly better shape than this one.
But not by much.
In the end, we just used our credit card and slunk from the store. And in truth, the kids don’t care how we got it, just that it’s here. In a little while, we’ll relent and let them play all their new games…but not yet. I haven’t had my breakfast and someone will have to wash those dishes. Spoiler alert; it won’t be me.
Shares