«   Beautiful on the Inside… It’s the Outside That Needs Work.
Mommy Needs a Cocktail.   » 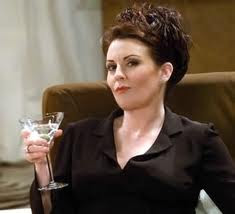 Like most people I know, I have been following the debate over our state’s Marriage Amendment. Given that we humans tend to live in self-selecting groups, most of what I hear tends to run along the “Up with HUMAN rights!” and “I love my GLBT brothers/sisters/homies!” line. It’s pretty much a very special episode of Will and Grace up in here. (In this scenario, I am of course, the always fabulous, drunk and sardonic Karen Walker.)

Karen Walker– the woman I am, inside my head.
What tends to leak through from the opposing side are those jawdroppingly vile comments on the far, far, FAR side of crazy…such as the uninformed, fantasy-driven, hate-filled claptrap published by the Minnesota Family Council. (a designated hate group, fyi.)
They seem to spend an unnatural amount of time describing in graphic detail what they imagine same-sex SEX to be like. Personally, I never trust folks who are so obsessed with fabricating the sex lives of others. I hardly ever see a person and think to myself. “I wonder what deviant sexual things that person is capable of?” (unless that person is Clive Owen. And even then I wouldn’t call it an “obsession”…more like “wishful thinking.”) Besides, delve too deeply into anyone’s sex life, and I guarantee that you will find yourself unable to look most people in the eye.
The whole thing is mind boggling to me, mostly because when you listen to some of this horrible, prejudiced characterizations you would think that gay folks are running, willy-nilly (ha! “..willy…”) down the street, their naked bodies painted purple and attacking homes with, god, I don’t know, glue guns and glitter, I suppose. All the while, forcibly indoctrinating youth with a mixture of drugs, club music and their keen fashion sense.
Of course, that isn’t even right. The characterizations are far, far worse. And that, truly, breaks my heart, because they are being wielded against some of my dearest friends in the world. People I respect and love. I shouldn’t have to say that GLBT folks are the same as everybody else. That they don’t have time or energy to “promote the gay agenda” because they are too busy working and caring for the people in their lives, just like the rest of us.
I have long maintained that every girl needs a gay best friend. I don’t know why, exactly, only that my life has been made so much better, kinder and, yes, more fabulous by those friends of mine who just happen to be gay.
Here’s what your gay best friend will do for you;
So enough, already. IT’S JUST SEX. And I really don’t care to hear what ANYONE does in the privacy of their home…
…except for you, Clive. You can tell me anything you want.
Shares

«   Beautiful on the Inside… It’s the Outside That Needs Work.
Mommy Needs a Cocktail.   »