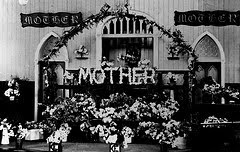 Last night, I was an awesome mother. I don’t always think that. Somedays I feel one wire hanger away from Mommy Dearest. Mostly I suspect that if I really knew what I was doing, the darling offspring wouldn’t be such lunatics, the house wouldn’t look like the inside of a gym locker and I wouldn’t be spending large swatches of time contemplating a mental breakdown. Less often, life goes smoothly, there is much cooperation and good will, and I marvel at the wonder of my amazing children and am hopeful that I haven’t scarred them too badly.

Way less often, like, I can count the number of occurrences on this one hand, the house looks like a gym locker, the children behave like lunatics and mommy responds perfectly. “Donna Reed WISHES she was half as gracious” perfectly. Oh, boy, have those times felt goooooood.
Last night, I came home and was catching up with the various wee ones, simultaneously eating supper and running homework interference when I leaned over to hug the little one and my fingers went right through the cloth of his shirt. Wait? What the…..? I stood him back an arm’s length to have a good look and lo and behold, someone had gotten hold of the scissors and lost his everlovin’ mind. There were holes all over his shirt and both knees of his brand new jeans were cut out as well. Because I have oodles and oodles of both time and money to be replacing those, apparently. Wait, there’s more. This lapse of sanity occurred not four feet away from all three sisters, including Miss Teen Wonder who missed the entire spectacle busy as she was facebooking friends, streaming christmas music and trolling for LOL cats, I assume.
Somehow, and I can’t even reconstruct for you what I said or how I said it, little one was sent to bed, his allowance to be paid directly to me until such time as I am reimbursed for his reign of destruction (so, forever), eldest daughter (here-forthwith known as “The Worst Babysitter in the World”) had her after-school computer access rescinded, and it all happened with just the right combination of sternness and humor. I KNOW! I’m shocked, too. I was soooooo awesome that both children accepted their consequences, hugged me and said they were sorry before trotting off to bed. (Well, TWBITW tried to argue that she didn’t have to watch her siblings with any sort of diligence because I wasn’t paying her to do it; which I rather brilliantly refuted by forcing her to google “annual cost of raising a child“- ha!)
So today I am on tippy-toes, attempting to not go all Apocalypse Now on the kids before school. If I’m lucky, maybe I can coast through this morning on the afterglow and not spoil it by yelling or nagging or beating my head against a wall…
Aw, shoot.
Shares