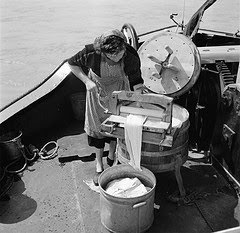 Don’t do today, what you can put off until tomorrow… or possibly, forever.

You know procrastination isn’t always bad. Sometimes it gives you a little more time to think or to develop a new plan of action. Sometimes it let’s you gather your thoughts and write a really great blog post. (Sure, MOSTLY it results in half-assed, poorly written and often misspelled posts– What’s your point?). This time procrastinating has succeeded in saving me money, effort AND face.

You see, for the longest time, I have been lamenting the eminent death of my clothes dryer. “It’s going for sure,” I’ll say, patting it’s dusty sides in a comforting manner, “Not sure it will last the week.” What can I say? The darn thing was here when we bought the house, four children ago, and it was pretty banged up back then. Lately (and by that I mean “the entire summer and all of this fall thus far”) it just hasn’t been drying clothes as quickly as it used to. No problem in the summer, when I tend to hang clothes outside on the line, but a real pain in the knickers in the fall. Drying a load of jeans has been taking close to an hour and 45 minutes…. I don’t have that kind of time, people! Do you have any idea how many clothes five children and two adults generate in a week? Especially when every one of those children are affectionados of “layering?” Every day requires tank top, tee shirt, overshirt AND sweatshirt/hoodie….You’d think that they could at least wear that middle layer again; the darn thing never even sees sunlight nor touches flesh. But, NOOOOOOOO. And do NOT get me started on those members of this family who are apparently ethically opposed to putting clean clothing away in actual drawers, finding it easier to dump the lot on the floor amidst yesterday’s discarded attire and then, upon being asked to tidy their rooms, scoop the entire mess up and send it down the chute to be washed again.
Seriously. Do not get me started; I am near homicidal just thinking about it. Do you realize that there are clothes in our house, dang near threadbare from frequent washings which I swear have never made contact with an actual human body? Excuse me while I go breathe into a paper bag for a minute….

….Okay, I’m back. The point is, I need to do laundry every. single. day. We’re talking at least two loads and any variance from the schedule just leads to a massive laundry pile-up. This hour and 45 minutes to dry nonsense has resulted in a backlogged pile of laundry the size of a chest freezer. I can’t be sure, but there’s a good chance that a family of raccoons are living in the bottom of that thing and I just haven’t noticed. It would explain why all the cheddar cheese flavored potato straws keep disappearing… No, wait. That’s me.
So I’ve been putting off calling the repairman for several reasons;
1) I hate waiting for those guys. “We’ll be there between noon and 6pm.” Really? No way the rest of us get away with that. Try telling your doctor ‘s office that you’ll be there “Tuesday afternoonish” and see if that works out for you.
2) Money. Dryers are EXPENSIVE, ya’ll. Sure, it might just be the heating coil, but it might mean a whole new dryer.
3) In order to fix/replace it, people need to get TO it. Which means that the Volkswagen-sized pile of dirty laundry needs to be gone. Ditto the pile of errant items and off-season clothing on top of the dryer… also the collection of empty detergent bottles leaning precariously on the side…. and the boxes of outgrown clothing for the thrift store currently blocking the doorway. People, that is a lot of cleaning for no happy reason. I barely manage to keep the front entry clean enough to open the door and that’s my escape route! How on God’s green earth am I to motivate myself to clear a path to the dryer?
This weekend I decided to bite the bullet and clean off the top of the dryer, at least. I pulled off the winter coats, made a pile of belts, wallets and lipglosses retrieved from various pockets (but not the money. The money mom keeps. Oh, yes. Yes, she does.) I was starting to investigate the overflowing basket of junk when I realized that realized that for the first time in forever, I could see the back panel of the dryer.
And noticed that the cycle selector was set to “low.”
For the love of Pete. Months of dragging this out and all the time all I needed to do was turn the switch to “high?” I’d be furious, if I weren’t so relieved. Can you imagine the look on the repairman’s face if HE would have been the one to discover my error? I bet it would have been just as haughty as the tone of voice the cable company service rep used on me the time I called to complain about crappy reception and she asked me if I’d checked to make sure that the cable was attached to the television set.
“What?” I demanded furiously, “Of course it’s plugged in. Do you think I’m a…. Oh…. Never mind.”
That’s a moment I don’t wish to relive, in any form. In less than a minute, the deed was done and the coats, belts and sundries returned to their rightful place on top of the dryer. Sure, it would’ve been nice to have a clean and well organized laundry room, but given that procrastination worked so well for me, I’d hate to jinx it. You see, our oven seems a bit off these days and I would hate to tempt fate.
Shares